Although BitCoins are unique in the sense that they havea highly decentralized and non-state affiliated model, one can usefully analyze it in relation to another currency with widespread international adoption and neither is controlled by any single state: the Euro.

Figure 1. Although a Eurocentric economic model lends itself to cogent analysis, let us not forget that these two currencies are inherently different, and as illustrated, follow inverse supply progressions. Bitcoins in particular was implemented under a purposely deflationary regime. 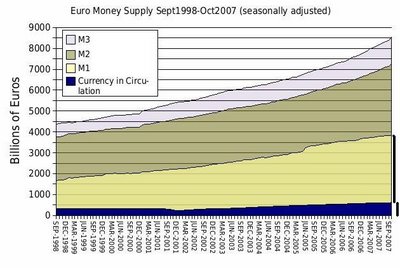 But as we can see, the Euro follows a distinct trend.

Figure 2. Increase of the supply of the Euro over time.

In my opinion, the Euro’s strength lies in the fact that it united a singular geographical location with many intersecting trade interests, with respect to both imports and exports. Thus, currency unification serves to only lower the barriers to trade among mutually interested members. More formally, a legitimization of the Euro, and analogously, BitCoins, lies in the concept of international risk sharing. This simply means that within the Eurozone, the Euro helps to protect member nations from asymmetric shocks – which is when a country is experiencing a financial shock in the opposite direction of a companion country. For example, the U.S. Experiencing deflating house prices while our Mexican neighbors to the south are seeing their housing prices skyrocket.As Robert Mundell, the pioneer of this theory, brilliantly explains,

“ A harvest failure, strikes, or war, in one of the countries causes a loss of real income, but the use of a common currency (or foreign exchange reserves) allows the country to run down its currency holdings and cushion the impact of the loss, drawing on the resources of the other country until the cost of the adjustment has been efficiently spread over the future. If, on the other hand, the two countries use separate monies with flexible exchange rates, the whole loss has to be borne alone; the common currency cannot serve as a shock absorber for the nation as a whole.”

Clearly, serious thought must be given to the viability of BitCoins, given its potential to provide cost-free aggregate risk protection.